How ecological communities are assembled, from deep time to the present day

Studying how ecological communities are assembled is challenging because most time series of community change are short (years to decades) and cover very limited spatial extents (metres to a few kilometres). This has inhibited our understanding of how communities are assembled over macroevolutionary timeframes including the process of speciation and niche evolution. Most species arise in different geographic places (allopatry) and so the transition from having allopatric to spatially overlapping distributions (sympatry) is a key stage in the build up ecological communities.

​We have been developing phylogenetic approaches for modelling  the geographic range dynamics of sister species to estimate the rate at which species attain sympatry and how this varies over time, according to species trait divergence, dispersal ability and the environment. Our results are providing evidence that competition between species and limits to dispersal can delay the attainment of sympatry for millions of years following speciation (Pigot and Tobias 2013, Pigot et al 2018) and that higher energy availability in the tropics has facilitated the build up of coexistence (Pigot et al 2016). These results are suggesting that the latitudinal diversity gradient is, at least in part, driven by a greater ecological capacity to support diversity in the tropics rather than simply the greater age or faster rates of speciation. 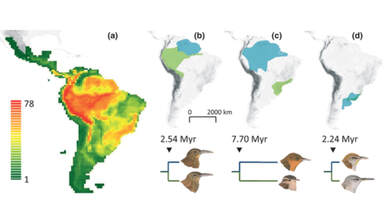 In addition to pairs of species, we have been developing mathematical approaches to model how entire communities are assembled over macroevolutionary timeframes, incorporating speciation, colonisation and extinction dynamics (DAMOCLES). We have found that incorporating these historical processes radically alters expectation of community structure compared to existing models that ignore speciation. We are currently extending this model to examine how species traits and geographic context modify assembly dynamics.
​ Ecological communities in the Anthropocene

Ecological communities are changing at unprecedented rates due to human activity. The transport of species around the world is resulting in an unprecedented mixing of long isolated biotas, the expansion of cities is providing utterly novel selective challenges and opportunities for species, with climate change driving many environments into states with closest analogues deep in Earths history. Our research seeks to understand how these anthropogenic drivers are altering Earths ecosystems.

Climate change: Just as it is difficult to infer how communities have dynamically assembled from only looking at a single snapshot of community structure at the present day, our understanding of how biodiversity will change into the future has also been limited by focussing on one or a few snapshots (e.g. the year 2070 or 2100). We have been developing a new framework for modelling how risks to biodiversity change are projected to change at much finer temporal resolutions (i.a. annually), the biodiversity 'horizon profile'. Horizon profiles describe the cumulative proportion of species in an assemblage that are exposed to conditions beyond their niche limits over time. This provides more information on risks to biodiversity that simply the magnitude of exposure (i.e. proportion exposed at any single snapshot), including when and how abruptly exposure will occur. We have been applying this framework to terrestrial vertebrates and marine organisms globally, finding that exposure of species within assemblages to dangerous climate conditions (i.e. beyond the range of temperatures they have previously experience) is likely to occur abruptly, with multiple species exposed near simultaneously. This exposure is projected to start within the next decade in tropical assemblages before expanding to high latitudes. We have found that limiting warming to <2 degrees C would avert the exposure of thousands of species and for the remaining the species, delay the timing of exposure by decades buy valuable time for species and ecosystems to adapt. Maps of projected biodiversity exposure can be viewed here: https://climatehorizons.users.earthengine.app/view/biodiversity-risk 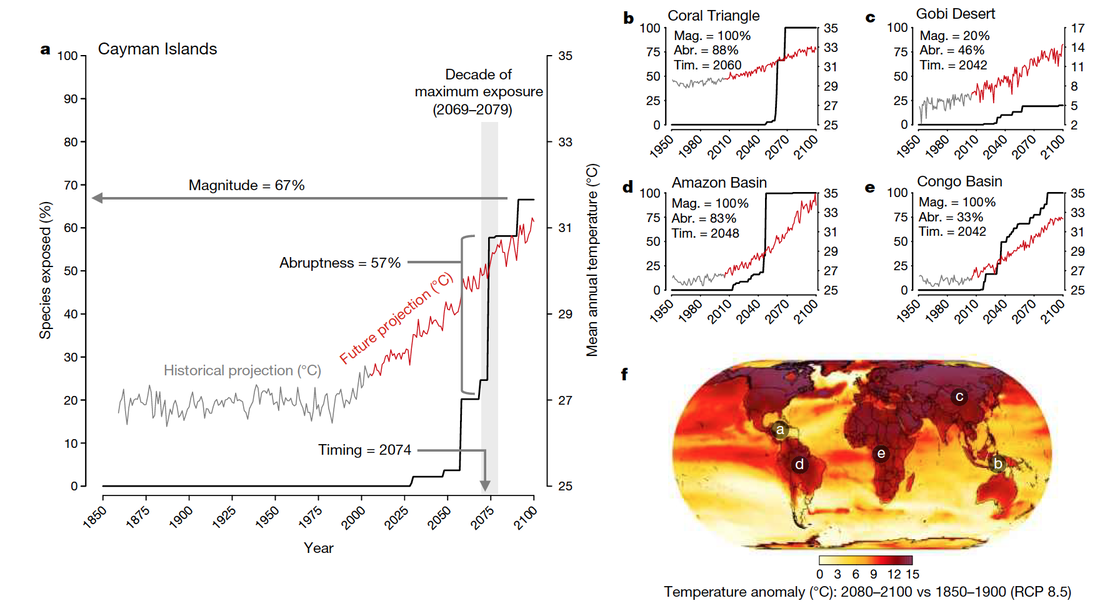 Alien species: Invasive alien species are a major threat to biodiversity but also provide a unique unplanned experiment to test the factors limiting or facilitating the geographic spread of species, and provides a complementary  route into understanding community assembly more generally. Using the global alien avifauna as a model system, our results are highlighting the critical role of both propagule pressure (i.e. number and size of introduction events) and the abiotic environment (e.g. climate suitability) in limiting the ability of alien species to establish new populations (Redding et al 2019) and their subsequent extent of spread (Pigot et al 2018). These environmental and stochastic factors override strongly conserved species level traits in determining alien range size, with closely related species with similar life histories often having very different alien range sizes. We are now working on developing more mechanistic models of alien spread to better predict future threats from invasion and how species will spread under changing climates. ​​